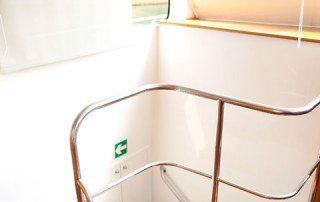 Click here for more add-on equipped on this yacht

Custom-built in Aberdeen, Hong Kong, Sardinia was first created as a part of a fleet of 4 yachts initially procured by One°15 Marina Club, back in 2007 where the marina was first launched.

Within her fleet, the Sardinia was a special edition, for she had been built with 2 engines instead of 1.

This meant that she was created with the ability to cruise the seas, while her “sisters” built houseboats–with only 1 engine for short trips or manoeuvring within the marina itself.

What’s included in their charter

We will allow one reschedule if the request is 14 days prior to the commencement of the rental, subjected to administrative charges of up to $300, if applicable. For unforeseen circumstances, please inform us and we will try our best to help you. Else, any no show is considered as a cancellation with no refunds.

Rates (table can be swiped left on mobile)